It may have been delayed due to Covid-19, but Aintree Equestrian Centre and its hard-working staff made every effort to put on a great ninth Dodson & Horrell Amateur and Veterans Championships and it was much appreciated by competitors.

“The staff all went above and beyond to make a good show,” said Campbell Thompson, with his comments echoed by fellow competitor Jassy Pyke.

“It was nice to feel some normality, (socially distanced) spectators were allowed to watch, and we managed to go out to dinner a couple of times,” said Jassy.

“They made a massive effort with podium finishes, rugs and sashes and a band for an evening entertainment outside the McCoy Bar. They are always friendly and accommodating here, and I rather liked starting and finishing in the light rather than the dark in November,” said Emily Morris.

Thirteen of twenty-five competitors reached the jump-off, Emily the sole rider to break the 30 second barrier and win by 0.28 seconds on the 10-year-old she has had for three years.

“She has a pony brain and is on springs, wants to win and is so easy to ride and keep – she lives out in the summer and is ridden barefoot – she hasn’t had shoes on since her British novice regional days,” said Emily, who works for the Mind mental health charity and is now targeting the HOYS silver league.

Georgie Pudge fired a warning shot in the first of the Dodson & Horrell 1.05m National Amateur qualifiers with a win on Tinkers Motion and duly headed the final with 0.46 seconds to spare in a fast, 13-horse jump-off.

“The win was down to my mum; she suggested a crazy turn no-one else attempted, so I was doubtful. She said ‘Well, you’re not going to win, then’ and we pulled it off,” said Georgie.

The Tinkers Tale sired 11-year-old out of Perpetual Motion – both rides of breeder Mark Edwards – was purchased 18 months ago.

“He was born a twin and for the first week of his life we had to help him to his feet every hour so he could drink,” said Mark.

“We bought him purely by chance after mum chatted to Mark’s dad Martin, but it’s taken me 18 months to get with him. He rounded up sheep on Mark’s farm and although we could see he could jump, he didn’t turn well and trotted around corners, said Georgie. “I also struggled to hold him – he’s only 15.1hh but thinks he’s 17hh and should have grown bigger – he’s got little man syndrome but we’re alike in a sense, I’m only 5ft yet my sister’s 6ft.”

Georgie also relies on Rose Tillson’s advice – “Sometimes ‘Tink’ gets strong and can take out two strides to a fence but Rose sorts him out. Nevertheless, he’s amazing – I can let him out of the stable and he just stands there and lets me tack him up.”

Jassy Pyke commandingly claimed the Dodson & Horrell Major Veteran Championship with the only double clear on her “Hero Horse of a Lifetime’ Bon Amego.

Only three of the 10 starters accessed the jump-off with second-drawn Jassy the only rider to provide another clear round – albeit also the fastest.

“I knew Julia Hardy [with Mista Blue] had won this championship in 2019, I couldn’t afford to go too steady kept tight but didn’t go crazy and Amego is ‘Mr Consistent’ and doesn’t have fences down unless I make a mistake,” said Jassy, who bought the Cador x Grannus 10-year-old three years ago from best friend Kim Barzilay, with whom Jassy liveries her horses.

“I started him in British novice, and I’ve since jumped tracks I’d never dreamed of. Now we’re jumping 1.30m and the Silver League Final is now my goal.”

Campbell Thompson is a vet in two ways – a popular Nantwich, Cheshire-based equine veterinarian and a veteran showjumper – and he showed his prowess as the latter in the Dodson & Horrell National Minor Veterans Championship on the Berlin 16-year-old Haughton Archie.

Eleven of the eighteen starters accessed the jump-off with Campbell finding the shortest route to win by 1.74 seconds.

“He worked so hard for me. He’s slow across the ground and spends time in the air – in the qualifier we took the same route as the fast ones and finished eight seconds behind, I had to do something special,” said Campbell, who executed two ultra-tight turns. “The first came off beautifully but the second into the double was very tight for a big horse – he’s 16.3hh – and he likes to look before he jumps but because I asked nicely and didn’t fluster him, he chipped a short one in and jumped it, ballooning over the second part – that photo is going on the wall! That usually puts you out of your rhythm, but we kept going and took out a stride to the last, making all the difference.”

“I found him quite difficult, he was angry, unhappy and it took 18 months to get together when Covid took over and there was nowhere to go,” added Campbell, who patiently persevered to find the key.

“I don’t know what turned the corner, we changed his shoes, diet, put toys in his stable and he only spends a short time supervised in the field as he hates being alone but savages any companion. Now he travels with a companion, so he doesn’t get stressed and it’s good to see him improving and willing to try working with me.”

Richard Baker made his journey from Sussex worthwhile claiming the first championship title in the 32-entry Love2Swim Mini Veteran Championship with Little Em by 0.30 seconds.

“She grew too big for Sam, so I took over,” said Richard, who runs a transport company and only rides at weekends.

Richard almost made it a double but had to concede to second place as High Wycombe-based Anna de Verteuil raced to the top on Bonita II for the 90cm Micro Veteran Championship, outpacing all 31 rivals over the single-phase course to win by 0.68 seconds.

“I was drawn early, got in every turn and they had to chase us,” said Anna. “Bonita’s so straightforward and tries her heart out.”

Anna experienced the highs and the lows. Second and third early in the week, Anna and the Toulon 20-year-old Bonita later suffered a crashing fall.

“I hurt my shoulder and Bonita seemed fine, although good friend Jassy Pyke came to our rescue. I’d misplaced the adapter plug for the massage rug and Jassy was a star, got on her bike to B and Q to buy one,” said Anna, who acquired Bonita three years ago.

“She came as a sales livery and hadn’t been in the ring for six years. I liked her straightaway. The owners wanted a 148cm pony and luckily my sister Jane [Dexter] fixed them up and I got to keep her.”

Jodi Randall claimed the Dodson & Horrell 95cm Amateur Championship on the Dutch-bred nine-year-old Heralda with a 1.86 seconds win in a 23-strong jump-off over a twisty, daring track.

“I did all the turns, took out strides from one to two and to the last; she was tired but tried her heart out,” said Jodi, who also claimed the top two places in the 1m Challenge Final with Kansas Quick WZ and Heralda.

“I’d bought my cousin her first horse and asked if they had anything else. Heralda reminded me of my ‘Black Beauty’ horse that died two years before and I had to have her. They were five hours away, so she was vetted, and I took a gamble,” said Jodi. “She was unhappy jumping, but I noticed her teeth were sharp; a horse dentist and a switching to a pelham changed that.”

Megan Cowan hit a purple patch this week and after compiling several wins, she maintained her form with victory in the Dodson & Horrell 85cm Amateur Championship on Tullycars Peek A Boo.

Megan began her tally with a hat-trick on Hellza Poppin II, winning two 95cm preliminary qualifiers and a 1m Challenge. She added two 85cm preliminary wins with the Irish-bred 16-year-old mare Peek A Boo – who stands just 146cm high – before they claimed a coveted Championship rug and sash.

The final day’s 85cm Championship was no mean feat as thirty-four of the original forty-seven entries gained jump-off access but Megan found the shortest route to win with 2.57 seconds in hand.

Megan first competed the 16-year-old mare in pony British novice and the Schools 70cm league back in 2015 but switched to seniors and Amateur classes 12 months later. They have competed at the Amateur and Veterans Championships every year since. Although they have won preliminary rounds, their best result until now was third in the 85cm 2018 Amateur final.

“Congratulations to all of the combinations who qualified for the event and to the worthy Championship winners. We are grateful to the teams at British Showjumping and Aintree Equestrian for their determination to host this Championship that was originally scheduled for last November. We hope that everyone has enjoyed this week as much as we have – it’s been great to speak to riders about their horses’ nutritional needs and see them competing at Aintree. We look forward to returning for the next Championship in November!” said Sam Horrell, Managing Director at Dodson & Horrell.

For a full list of results and further information about the Dodson & Horrell National Amateur & Veteran Championships, please visit www.aintreeequestriancentre.co.uk.

All images are courtesy of Majestic Photography 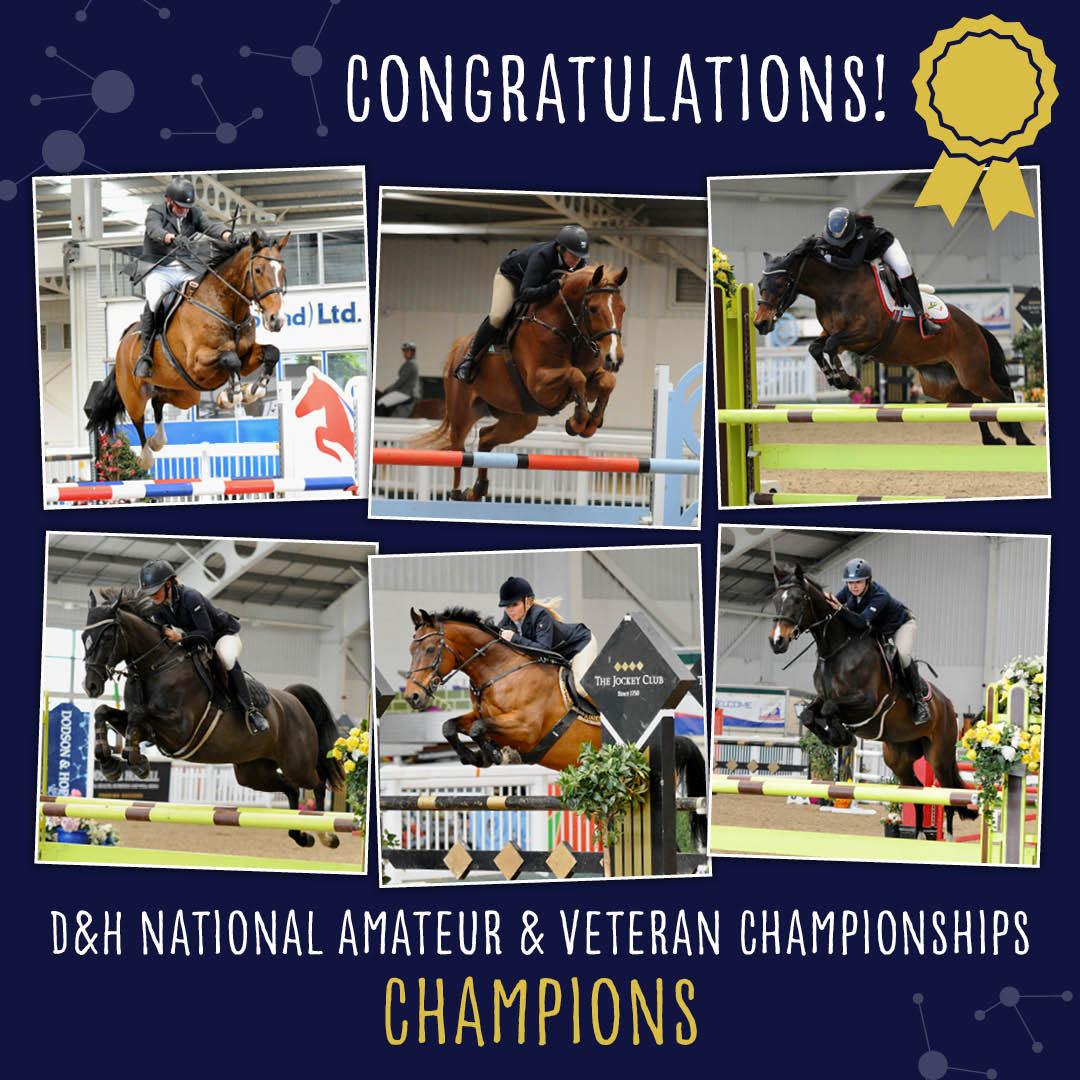