Hearing that she had won the January Dodson & Horrell PPORA Owner Trainer of the Month Award Jenny said “Wow that’s amazing! Dodson & Horrell are great sponsors, their support makes such a difference and I really appreciate what they do.”

For 36-year-old vet Jenny Davenport, race riding was a childhood dream triggered by family days out on the East Anglian point to point circuit.

“When I was seven I really wanted to be a jockey and I remember mum had racing colours made up for my birthday. Then University got in the way and I needed to wait a bit until I had the bank balance to do it, and a location to do it and be able to fit it in around the job – all those factors came into play, although the ambition was still there.

Jenny who rode her first race in February 2014, explains “I hadn’t ridden for 20 years and I thought ‘it’s now or never’ and it was ‘now’. It has all come together and I really really enjoy it, getting out riding every morning is an absolute luxury.”

After a potentially disappointing start – colic prevented her first horse reaching the track and her second horse Chase Gate developed a tendon issue after just a few runs – she acquired the 14-year-old Mic’s Delight and hasn’t looked back. With six wins, five runner up spots and seven third placings from 22 runs he’s shown remarkable consistency since their first race together in November 2014.

“He’s been magic, a horse of a lifetime for an owner-trainer-rider like me,” she says. “He likes to front run, which suits me, and he’s generally a very safe jumper – apart from when the loose horse scuppered us at Chipley Park.”

Mic’s 2017 – 2018 season got underway with a winning bow at Wadebridge in December for Millie Wonnacott, deputising in the saddle due to Jennifer’s work commitments. Partnered by Jennifer he returned to the track in January winning the PPORA Novice Riders’ Race in his customary bold trailblazing style. Another keen running effort at Chipley Park secured third place in that day’s Dodson & Horrell PPORA Novice Riders’ Series Qualifier.

“I love it, I am passionate about the sport. I won’t be able to ride forever but I’d like to always have a pointer. It’s a fairly natural thing for a horse to do, they enjoy getting out and about. You’re really involved whether you are owning, riding or training, I like the proximity to the action you get point to pointing, you see some of the big names and witness young horses coming through – that’s exciting.” 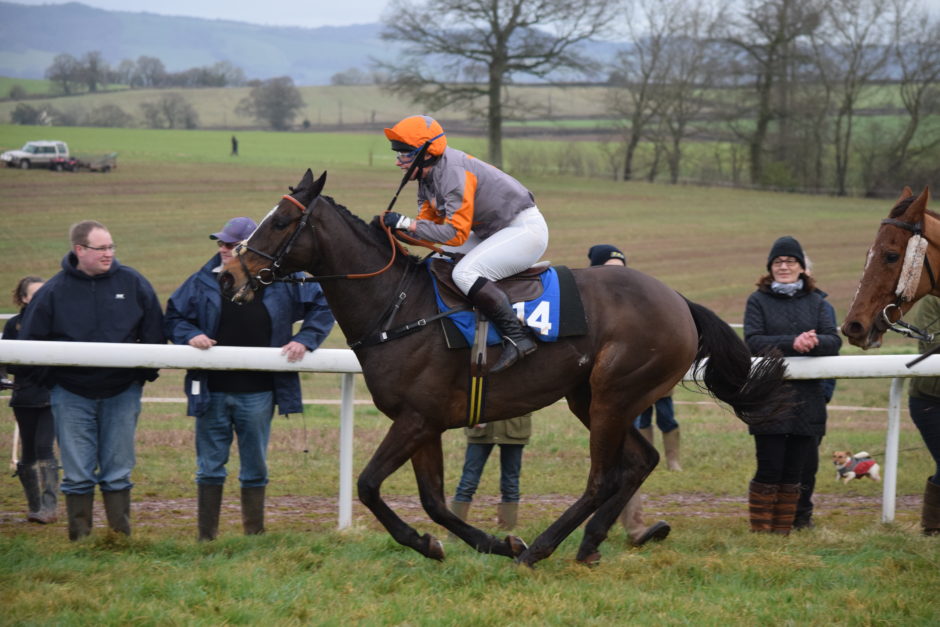