Sometimes being old has its advantages! I am easily old enough to qualify to jump in the Dodson & Horrell National Amateur and Veteran Championships at Aintree in fact I have been old enough for nearly 10 years having first competed at Arena UK in 2006.

Let me introduce myself as I will be blogging my build up to the 2015 Championships. My name is Sian Hinkins, from Welshpool, a farmer’s daughter who always had ponies in the field due to my mother being very keen horsewoman, who still comes with me everywhere at the age of 80, oh and her stepladder to she can get in the lorry and my grandfather (affectionately known as Hodge) who had a dealing yard at the coaching inn in the centre of town.

I was put on a pony before I could walk. Hodge’s sales pitch was always “I wouldn’t put my grand-daughter on a naughty pony” let me assure you he did! Both Mum and Hodge were District Commissioners of the Tanatside Pony Club, where I spent many happy years competing in all disciplines, Mounted Games at HOYS to Eventing at Stoneleigh.

I will be taking two horses to Aintree they should be called Chalk and Cheese as they are so different in all respects. Firstly there is Johnny who I bought as an unbroken three year old from Ireland, classic breeding King of Diamonds/ Clover Hill , he is now 17 and he is huge and extremely laid back it’s such an effort for him to get in top gear and for me to get on! However, over the years he has managed to become Grade A and pick up a couple of seconds at previous finals!

He is very low mileage too as he had a suspensory injury and was in the field for two years recovering I also had very little time in his younger days as I ran a busy restaurant in Welshpool. Early Sunday morning shows were not attractive after running around Saturday nights waiting on. There was many a time I wished I had the same energy as when I was 18 and used to ask Mum to pick me up on the way to a show still in my ball gown!

My second horse is a little 15hh and mare that I bought as a foal who Johnny mothered during his convalescence. She is now seven years old, by It’s the Business out of a Grade A thoroughbred mare, she is aptly named Busy Lissie. I used to call her my mad pony as I had no brakes but she is improving all the time and now jumping Newcomers she should really be jumping Foxhunters but the old bird riding her is losing her bottle!

So looking forward to the next four weeks preparations... the biggest challenge will be keeping in one piece, having had a couple of injuries this year, I seem to be getting rather clumsy these days...or should I take more water with it?! 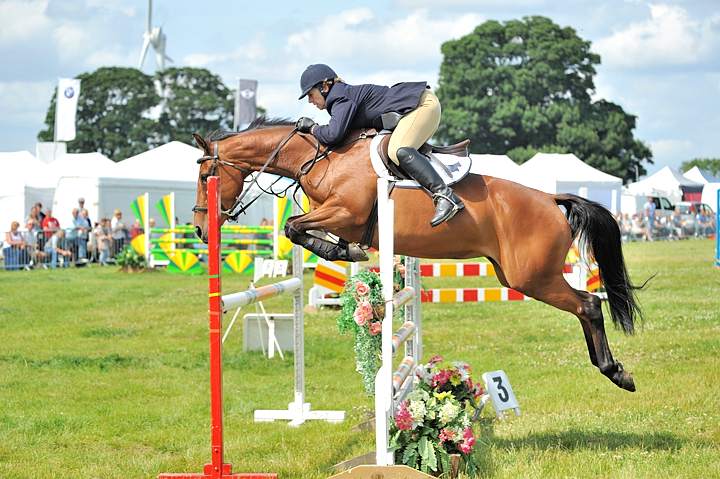