Eydon based Owner Trainer Amy Cox has been crowned the Dodson & Horrell PPORA Club Members Novice Riders Champion in what ended up being a three horse race on good but not fast going at the Melton Hunt Club meeting at Garthorpe on Sunday 21 May. This concludes a season long series of 12 nationwide qualifiers that aim to encourage novice riders to compete for a place at the prestigious final which has been won in the past by notable riders such as Sam Twiston-Davies and Megan Nicholls, daughter of 10 time champion trainer Paul Nicholls. Winning jockey Amy Cox qualified for the final at one of the PPORA Club Members qualifiers also held at Garthorpe back in March, coming second by a neck to J Hewitt riding Smiths Hill. “This time it was great to put that right and get a win, the conditions were totally different this time and the going was ideal for Beggar’s Velvet,” said Amy.The 11 year old bay gelding Beggar’s Velvet, owned by Amy’s father Bay Harper and trained by Amy herself beat the favourite Alan Hill’s For ‘n’ Against ridden by Izzy Marshall into second place, with Creepy under Charlie Dee and trained by Claire Hardwick in third.“I had to hold him up, as this is the only way to ride him and let the others take the pace, which they did at a fairly decent gallop for a Novice Riders and this suited Beggars Velvet perfectly. When Creepy fell away, it left me and Izzy to fight it out, I sat quiet and let him go down the hill to the second last where he jumped ahead of For ‘n’ Against to take the lead, I pushed him on and he responded well. Izzy’s horse had nothing left and we stretched away to win by 15 lengths.”Amy is riding in her fifth season point to pointing but considers herself “very much an amateur” as each season she has just one horse that she and her father buy together and she rides and trains herself. “I am a busy mum who also works full time, so my mornings riding out Beggar are my treat for the day.” Amy works in the office at her parents wedding venue, Crockwell, in Northamptonshire and when she is not working is looking after her son Hamish who is 18 months old. “Being a mum has not put me off riding, if anything it has spurred me on,” says Amy who describes Beggar's Velvet as the first horse that she has had that is truly competitive. “I have ridden in quite a few qualifiers over the years and it is such a thrill to ride in the final for the first time and win, it is definitely the biggest win of my career so far!” Amy may well ride Beggar’s Velvet in one more race before the end of the season as he is fit and well and obviously in good form. Sam Horrell, CEO at Dodson & Horrell said “It has been a great day with enthusiastic crowds; we always enjoy hosting this series of races and especially the final at Garthorpe. We are keen to support point to pointing and particularly the novice riders series as this helps us reach the grassroots of the sport and the heritage of horse racing." 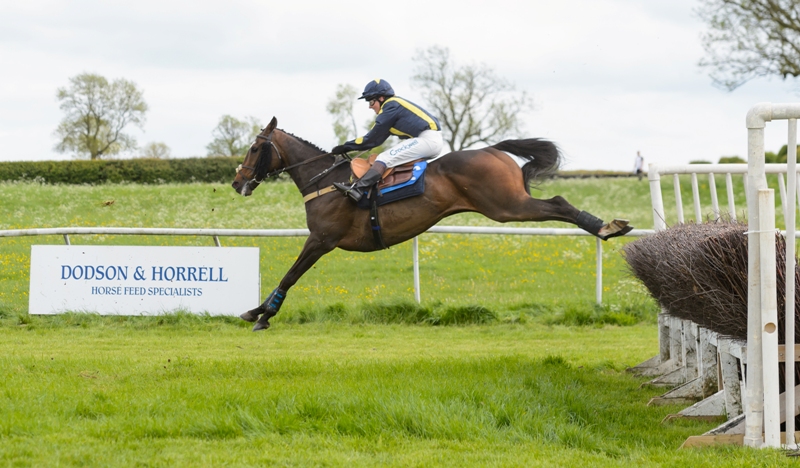