At just 16 years of age James Bowen from Haverfordwest, Pembrokeshire has been awarded the 2017 Dodson & Horrell Novice Award for the Wilkinson Sword, which was presented to him at the PPORA (Point to Point Owners and Riders Association) annual Stratford lunch in June. This is an annual award presented to the leading male novice rider under-21 with no wins at the season's outset, James has broken the record and has ridden a remarkable 30 winners.

Born into racing – his father Peter, a licensed trainer and his mother Karen have transformed what began as a modest bungalow and a couple of fields into a top class racing yard. His brother Mickey trains pointers and brother Sean, who has previously won the Wilkinson Sword, is a former point to point rider who’s made a successful transition into the professional ranks – the foundations for a race riding career were laid early on.

James is in no doubt of the contribution point to pointing makes to National Hunt racing, offering a supportive place for aspiring professionals to gain early experience, whilst at the same time giving opportunities for the true amateur to get their race riding fix.

James commented: “My time spent pony racing helped me a lot with the transition to pointing. Obviously you have to be sharp at the start, and it teaches you how to ride out a finish, so you feel like you have the edge on some people because you have a little bit of experience already. I’d say my brother Mickey would have had as many winners without me as they were all in good order when they were running. Winning the Dodson & Horrell Wilkinson Sword has certainly been the highlight of the season because it seemed a bit impossible given when I started. To set a new record really caps off a great season, so a big thank you to everyone who helped me achieve it. I go Conditional on 1 July 2017 and don’t have any real plans as to where I’m going just yet; I just want to keep improving and try to ride as many winners as I can under Rules.” 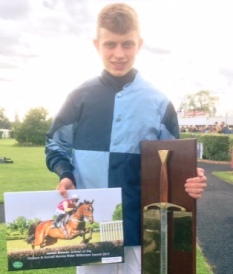