The 2021 Dodson & Horrell National Amateur and Veteran Championships returned to its very best post Covid restrictions at Aintree International Equestrian Centre with evening entertainment of quiz night, singing and dinner dance, a fabulous atmosphere, rugs, sashes and presentations with spraying champagne.  More than one riding jacket will be at the dry cleaners this week!

Two on-form riders already with a win apiece proved their success was no fluke with not a hair’s breadth between them as Katie Shaw and Emily Morris shared the honours in the Dodson & Horrell 1.10m National Amateur Championship in an exciting jump-off.

Forty-three competitors originally chased glory with fourteen qualifying for the jump-off. Katie from Gayton, Staffordshire was the first to break the thirty second barrier with incredibly tight, almost impossible turns as she skimmed the wings on the home-bred 20-year-old Fools Business. Five horses later, Emily from Whitchurch, Shropshire made a supreme effort on her accumulator winner Bean Cruising and although they had some luck at a midway vertical, they cleared the final oxer with a huge leap to stop the clock in exactly the same time and some six seconds quicker than their nearest rivals in third place.

“Joe [aka Fools Business] was amazing, he’s jumped well all week and I didn’t expect him to deliver today – he’s definitely younger than his years,” said Katie, also winner of the 1.15m Challenge final.

“I’ve never been able to beat Katie but my mare is 100% a trier and she pulled it out of the bag today,” said Emily, who also topped the accumulator on the Mr Jumbojangles x Cruising 10-year-old.

“I’ve won at HOYS and Scope but this is my first at the amateur and Veteran, although I must be mad as I’m here on my own with my 7-month-old daughter Gracie but friends have been brilliant holding her while I rode and she was a saint,” said Julia, who topped the nine-horse jump-off by 1.26 seconds on Rossio.  “He’s not the fastest but we got an inside turn into the double.”

The fourteen starters were halved to seven for the jump-off with Derbyshire-based British Showjumping UKCC coach Julia claiming victory by 1.02 seconds on the Lexicon sired 12-year-old mare bought two years ago.

“We didn’t really get started until this year because of lockdowns and illness but I’ve had a lot of help from John Steels and now I realise how careful she is, I ride her as forward as she likes and a long stride to the last won the class.”

“Clarity is so genuine, he’s big but helps me out and can turn on a sixpence. This was only his second show away from home and our start to the week was mediocre but that all changed today,” said Marion, who is a veterinary nurse in Kilmarnock, mother to nine-year-old twins and married to a dairy farmer. Life is somewhat full. “It’s a family affair, I have great support and to win with a home-bred I’ve brought on myself is so rewarding.”

Jodi Randall produced a flying round to take the Dodson & Horrell 85cm National Amateur Championship with her 2020 95cm titleholder Heralda.

Twenty-two of the sixty-two starters returned for the jump-off with Jodi making short work on the 9-year-old mare to win with 1.63 seconds to spare.

“I came off in the first qualifier and landed with all my weight on my elbow so I was riding in pain but we still managed to take strides out down the first distance and to the last fence,” said Jodi, who hails from the Kent town of Sandwich near Dover.  “Heralda loves it, the more spectators cheer, the faster she goes, we egg each other on.”

Nine competitors from a start list of thirty-nine provided clears to access a hotly contended jump-off with Caroline winning from the final draw by only 0.08 sec over Anna de Verteuil’s Bonita II.

Caroline shares the 9-year-old mare Happy Girl A, purchased six years ago, with her daughter Evie.

“She’s our therapy, she’s quite sharp but has competed with Evie in the Para Championships,” said Caroline, who credits trainer Keeley Durham for her organisation, structure yet with flexibility.

“I was off for two months after a bad fall in the summer and Keeley has rebuilt my confidence; it was the best decision to livery the horses with her,” added Caroline.

So, the Dodson & Horrell Amateur and Veteran Championships is over for another year. Many of the riders commented on the superb efforts of Aintree staff for putting on such a marvellous show and how time flies when you’re having fun! Roll round the next one, we can’t wait. 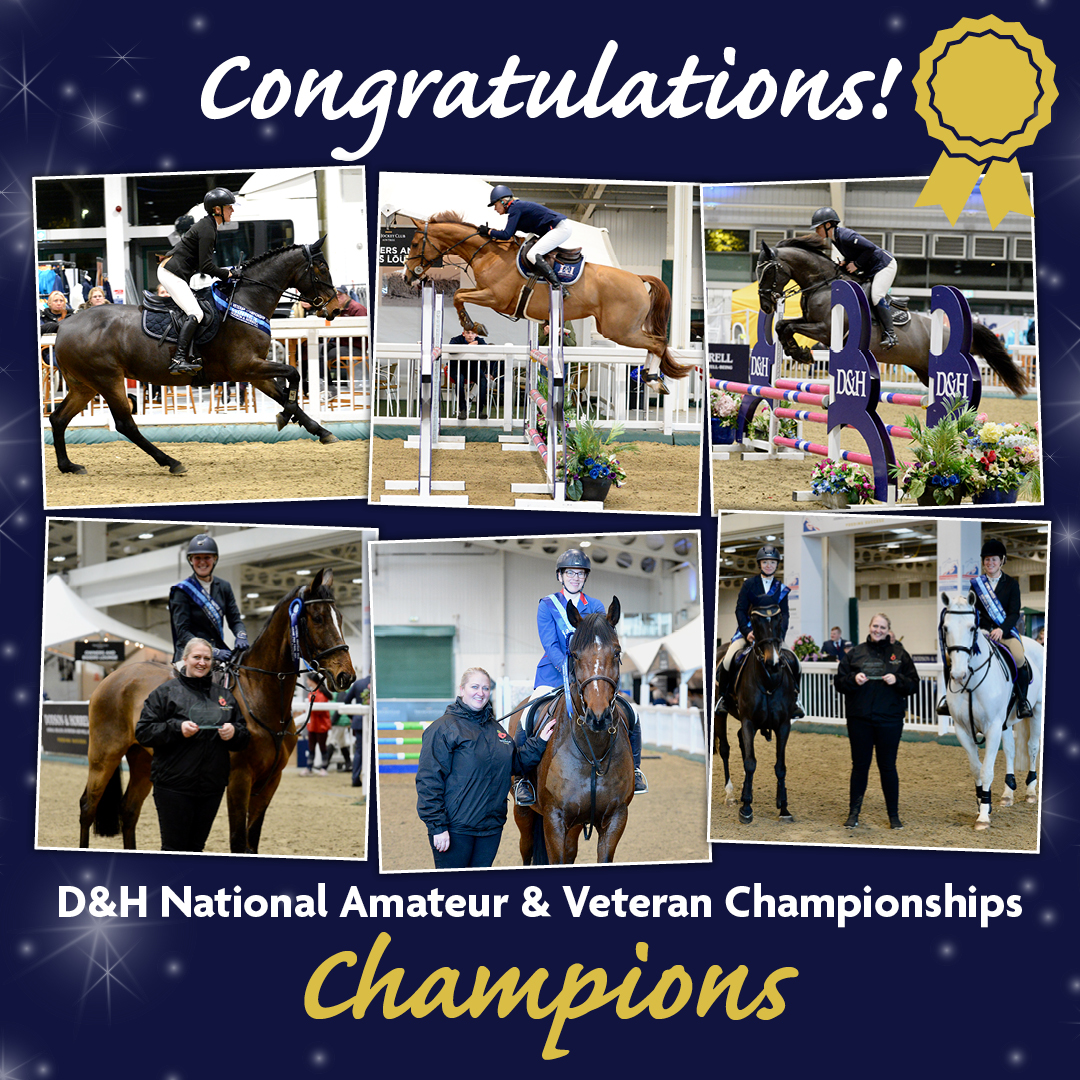