The Dodson & Horrell Novice Silver proved a battle of future para horsepower talent – and what a great battle it was. Paralympic Gold Medalist Natasha Baker took the lead when about half way down the running order with her newest star Keystone Dawn Chorus, a British bred mare by Dimaggio, with a great 72.77%.

It was an agonizing wait as combinations tried to topple Tash and Lottie and they held their lead right up to the last competitor, Louise Robson riding her own and Amanda Shirtcliffe’s Remi II. It was a second trip around the arena for ‘Kevin’ today having done the Grade III Championship with Amanda to finish third. Louise, who's well known in the dressage world for her talents in transforming race horses into dressage divas, trains Amanda and they’ve built quite a formidable relationship in the para world and Kevin has very much been a project for them as he’s not been straightforward so their expectations of today weren’t too high. However, Kevin, British bred by Desert Moon took it all in his stride and surpassed all expectations for a 73.02% score and the Novice Silver title on Louise's debut in the hallowed arena at Stoneleigh.

“My aim really was to keep him in the warm up and get round! I did think a few days ago I might actually be safer on one of my racehorses!” explained a jubilant Louise. She continued, “Plus, he’d gone really well for Amanda earlier in the para championships, but I can’t carry a whip or use my voice! Amanda and I work well together – normally it’s me feeding back how he feels but today, she could give me the advice. “I’ve been riding him to give him arena experience and get him forward off the leg to help Amanda bring him on as a para horse. He’s got huge paces and I think as a result he did a lot as a young horse and just became a bit angry with riders. We use a lot positive reinforcement!”

The win marks a huge step in progress towards the Louise and Amanda’s end goal, a place on Team GBR. “Today really felt like we’ve started his Tokyo campaign. He really held his own and we know there’s so much more to come and that’s exciting. Taking him to Doha CEPDI was a risk but it made him – he came back a dressage horse. To achieve this on him is really special. We’ve taken so much time with him, worked hard and come so far…to win is just reward,” said Louise.

After an early start to the day, Victoria Maw and her own six year old Benito Dorato topped a highly competitive Dodson & Horrell Novice Gold with 73.29%. The starting line-up oozed class and the standard proved high as the top ten each rode to plus 70% scores.

Speaking about her test with the home-produced Benny an elated Victoria said, “I was really pleased, he had really good balance the whole way through and he felt so fluent. He stayed connected the whole way, there were no major mistakes.”

Benny has been owned by Victoria from the age of just three days old, after she purchased him as a foal in Germany. He spent three years growing up in his home country before moving back to the Lincolnshire based rider who’s sympathetically produced him with a varied approach to working: “He likes jumping, and he does a bit of everything at home. He hacks, goes on the treadmill – he does a little bit of everything to keep him happy!”

“It has been a great day here at the Dodson & Horrell Novice Silver and Gold Championships and we have watched some very competitive tests. Congratulations to all the horse and rider combinations that have taken part, especially to the deserving winners Louise and Victoria." Anna Horrell, Director at Dodson & Horrell, summed up. 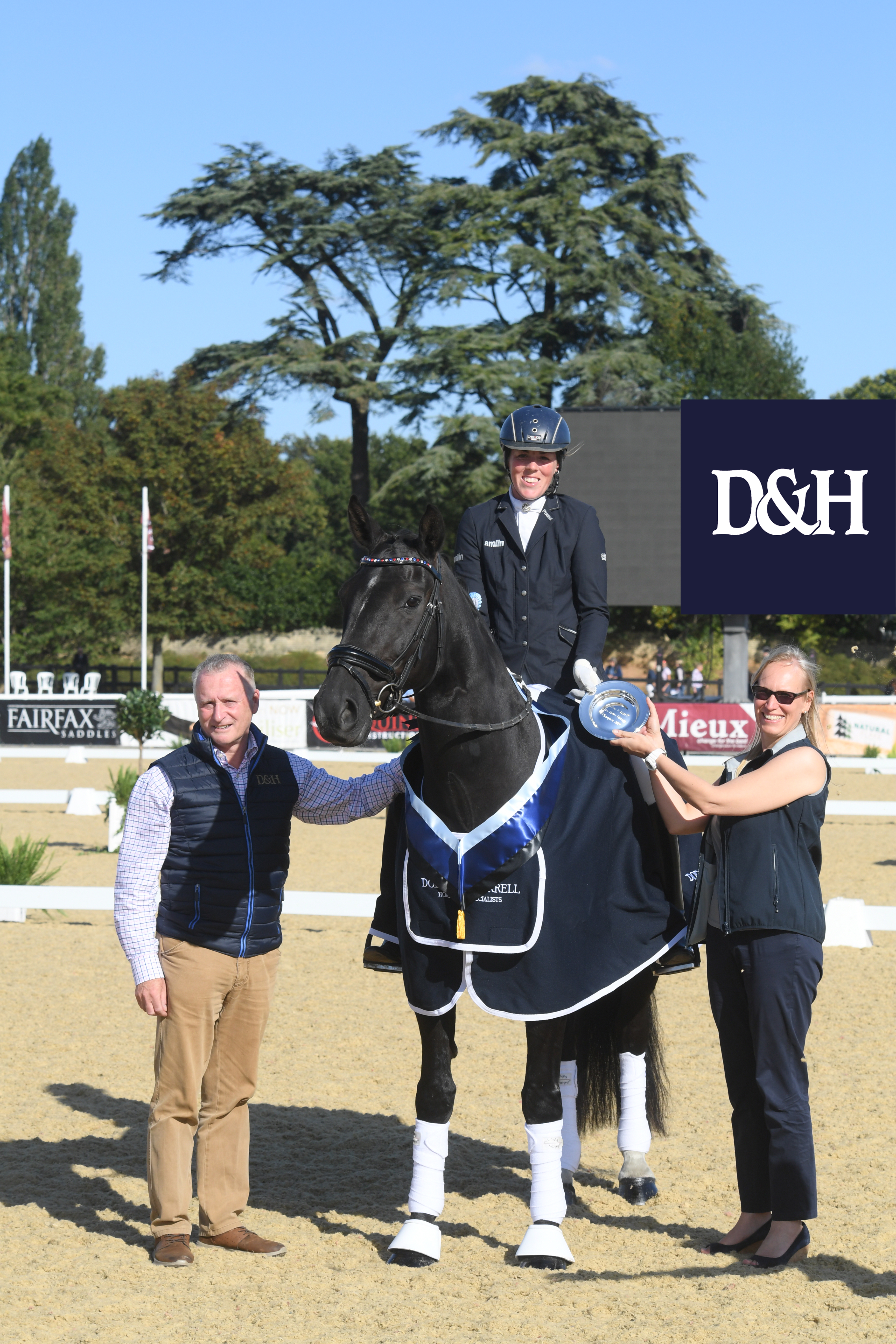 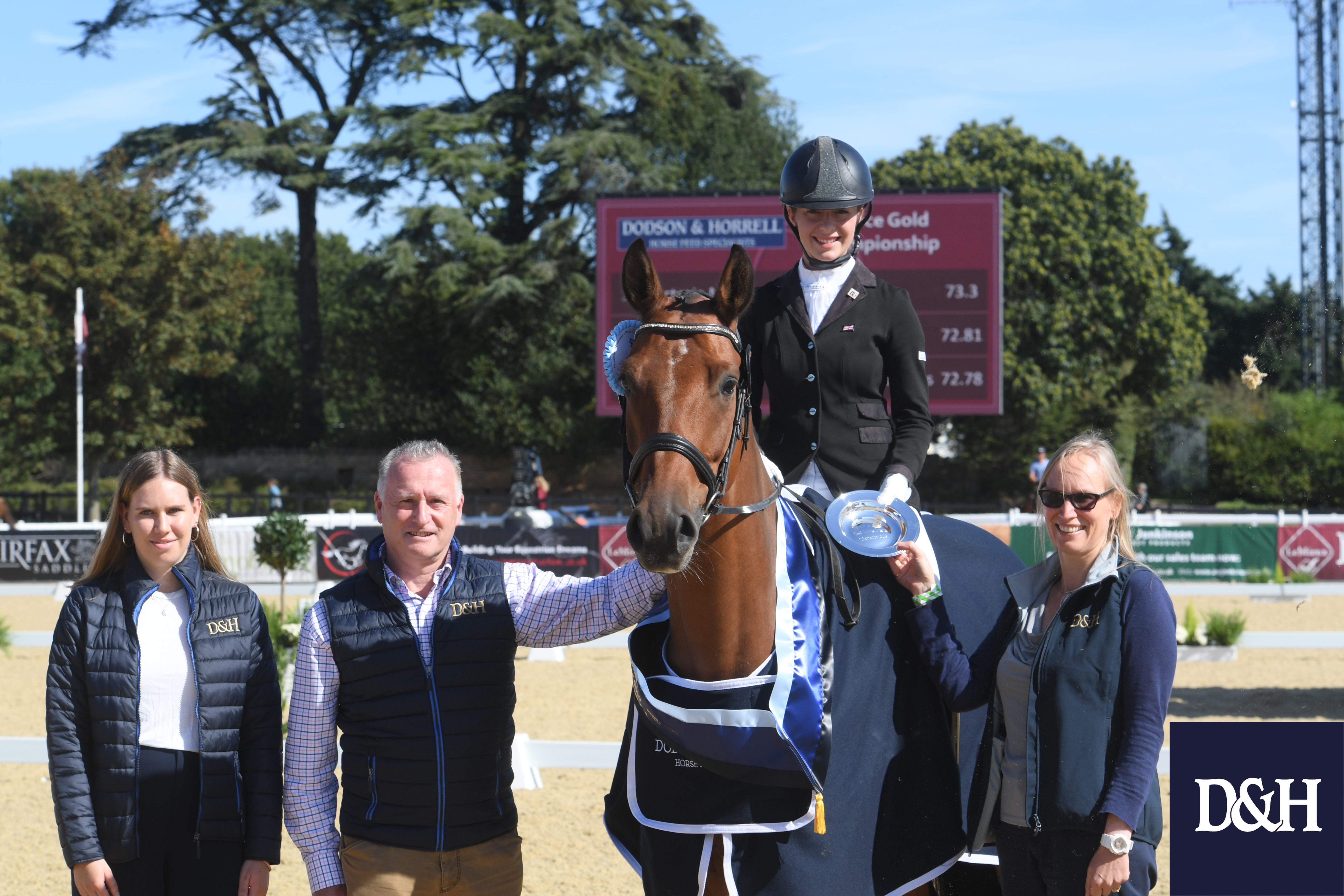